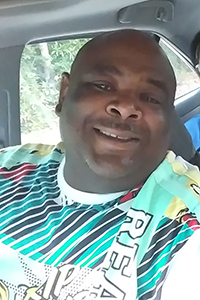 “His Master replied; well done, good and faithful servant! You have been faithful with a few things; I will put you in charge of many things. Come and share your Master’s happiness!” (Matthew 25:23).

Derick L. Cotton was born in Bogalusa on June 18, 1978, to the late Myrtis Graves and Donna Verdine Jackson.

He was a lifelong member of Mt. Moriah Baptist Church. To know Derick was to love him. He was a jack of all trades, best noted for his mechanic work. Derick was educated in the Bogalusa City Schools.

His memory will forever live in the heart of his mother, Donna Verdine Jackson of Bogalusa; three sons, Ladarious Cotton-Robinson (Richelle), Derrian Baham and Kylon Cotton, all of Bogalusa; two daughters; Ladasecia Cotton Robinson (De’Salaam) and Derionna Cotton, all of Bogalusa; three sisters, Tammy Brown (Steven), Edrica Cotton-Taylor, both of Bogalusa, and Marshall G. King of Baton Rouge; one brother, Gregory Cotton of Bogalusa; one granddaughter, Ma’leah Cotton-Robinson of Derby, Miss.; one nephew, Reginald Sartin (Jelissa) of Bogalusa; uncles, Ralph Graves (Christine), Glenn Cotton, both of Bogalusa, and Michael Jason of Lecompte; aunts, Bonnie Foster of Varnado, and Jeannette Richardson of Baton Rouge; his right hand men, Anthony Robinson Jr., Kermon Warren, Ernest Peters Jr., and Cullie Cotton Jr. (Amy); and a host of cousins that he loved dearly as if they were brothers and sisters.

He was preceded in death by his father, Mrytis Graves; one brother, Reginald Cotton; grandparents, the late Otha and Roxie Graves and the late David and Bonnie Cotton; and a host of other loved ones and friends.

A drive-thru visitation will be held Friday, Feb. 19, from 4 p.m. until 6 p.m. at Crain and Sons Funeral Home in Bogalusa. The funeral service will be Saturday, Feb. 20, at noon at Mt. Moriah Baptist Church.