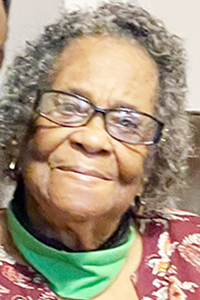 Nellie started school in Washington Parish and finished in Orleans Parish. She attended Katie’s Cosmetology School and completed several college courses through the OIC program. She also served as a member of the Eastern Star Association at Prince Hall.

She was born and raised in the church. She attended and held membership at Payne Memorial A.M.E. Church, where she served on Usher Board #3. She worked at Magee’s Beauty Salon for over 30 years.

She was married to the late John H. Myers, and to that union she was blessed with five children, John Mitchell, Donald Ray, Cynthia LaVern, Shelton O’Neal and Freddie Edward Myers.

Later, she married the late Charles Hayes and acquired two stepsons, Darrin and Jeffery Hayes. She was also loved and respected by our extended family, our brother, Kevin “Papoose” Lawrence.

A drive through viewing was held Thursday, Feb. 4, from 2 p.m. until 3 p.m. at Crain and Sons Funeral Home in Franklinton.

A Viewing will be held Saturday, Feb. 6, at The Boyd Family Funeral Home, located at 5001 Chef Menteur Highway in New Orleans, from 9 a.m. until 10 a.m., with a funeral service to follow at 10 a.m., with the Rev. Troy Williams, pastor, officiating.

Crain and Sons Funeral Home of Franklinton are in charge of arrangements. Sign the guestbook online at www.crainandsons.com.