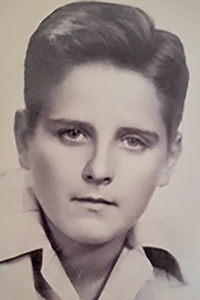 Charles Marshall Richardson Sr., of Metairie, passed away at East Jefferson General Hospital on Jan. 21, 2021, from Covid complications. He was born in Bogalusa on Feb. 6, 1932, into a family with deep roots in Washington Parish. His parents were the late Judge Jim Warren Richardson Sr. and Henrietta Russell Richardson. He is survived by his wife of 67 years, Mary Sandra Pole Richardson.

Even though he moved to Metairie, he considered Bogalusa his home. He was always a visionary and an active member of the community.

Charles was a true gentleman who never met a stranger. The hearts of his wife, children, and grandchildren are broken, but they will forever remember him as the amazing man he was.

He was an outstanding role model for three generations of children, a number of whom share his name.

He was preceded in death by two brothers, Jim Warren Richardson Jr. and Richard Richardson; as well as one grandson, Michael Kyle Taylor.

In lieu of flowers, the family requests that you consider making a donation to Annunciation Catholic School in Bogalusa.

Please visit www.pooleritchiefuneralhome.com to view and sign the guest registry.