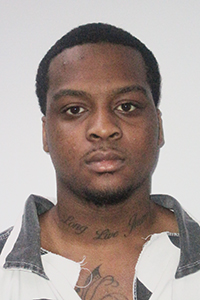 While patrolling in Bogalusa on January 21, officers with the Washington Parish Sheriff’s Office Drug Task Force observed a vehicle traveling at an excessive speed in a residential area, according to WPSO Chief Deputy Mike Haley. The vehicle was stopped and officers detected a strong smell of marijuana.

“While the driver was being questioned about the possibility of drugs in the vehicle, the passenger produced a large bag of marijuana, prompting a vehicle search for additional illegal items,” Haley said. “During the vehicle search, officers discovered and seized a Glock semi-automatic pistol, which was concealed under the passenger seat.”

The passenger, Kameron Kevonne Bickham, 20, a resident of St. Louis Street in Bogalusa, was arrested and booked into the Washington Parish Jail. He was charged with possession with intent to distribute marijuana and possession of a controlled dangerous substance with a weapon present.

“It’s always good when our officers are able to remove drugs from our community,” Washington Parish Sheriff Randy Seal said. “Our Drug Task Force officers are constantly moving throughout our parish in their quest to identify and arrest drug dealers. I congratulate them on this arrest.”