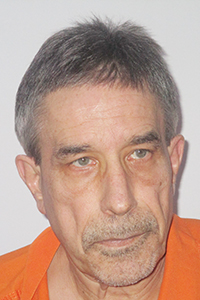 On Sunday, Washington Parish Sheriff’s Office Sgt. David Cupp responded to a business in Varnado after a report of a man driving erratically, according to WPSO Chief Deputy Mike Haley. While headed to the area, Cupp received a message from Varnado Police Officer Louis Adams reporting the suspect had parked his vehicle in front of the business establishment and entered the store, Haley said.

“When the suspect exited the store walking in an unstable manner, Sgt. Cupp confronted him and noticed the suspect’s speech was slurred and he smelled strongly of marijuana,” Haley said. “Sgt. Cupp detained him and discovered a quantity of marijuana, as well as narcotic pills in a plain unmarked container.”

The suspect, Gary B. Wehmeyer, 62, a resident of Louisiana Highway 21, was arrested and transported to the Washington Parish Jail. He was booked on charges of possession of marijuana, possession of drug paraphernalia and two counts of possession of illegal narcotic pills.

“I’m so glad Mr. Wehmeyer was prevented from getting back on the highway,” Washington Parish Sheriff Randy Seal said. “Good job, Sgt. Cupp, on making this arrest and thanks, Officer Adams, for your assistance.”