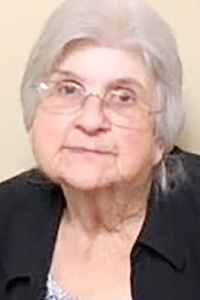 Jessie Merle Fornea Jones, 79, a resident of Varnado, passed away on Wednesday, Jan. 13, 2021, at her residence in Varnado.

Jessie was employed in food services, working at Bogalusa Charity Hospital and Washington Parish School System for many years. She had a humble heart and showed her love for others by always cooking and serving food every chance she could get. Everyone loved her and she will be sadly missed by all. Her pride and joy were her grandchildren and great-grandchildren.

She was preceded in death by her husband of 55 years, George Jones Sr.; and also her parents, Carl John Fornea Sr. and Gladys Lott Fornea; brothers, Gene and Carl Fornea Jr.; sisters, Marguerite Freeman and Janice Freeman; and her mother in-law and father-in-law, Russell and Winnie Jones.

Visitation will be at Poole-Ritchie Funeral Home on Saturday, Jan. 16, from 9 a.m. until noon. The funeral services will be at noon with Bro. Kelly Penton officiating. Interment will follow at the Old Fornea Cemetery in Varnado.

Food will be served at 63377 Fornea Road after the funeral services.