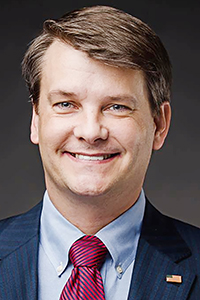 Congressman-elect Luke Joshua Letlow, from Start, passed away from complications due to COVID-19 on Dec. 29, 2020. He was born to Johnny and Dianne Letlow on Dec. 6, 1979, in Richland Parish.

Two of Luke’s favorite phrases were “win the day” and “go, fight, win,” and he did win big in his 41 years. Recently, Luke’s wife, Julia, lovingly shared a tribute after he won the Louisiana 5th Congressional District race. In talking about God’s sovereignty over Luke’s life, she stated, “Before I formed you in the womb I knew you, before you were born, I set you apart” (Jeremiah 1:5 NIV). Luke was beloved all over the state for his servant’s heart and peaceful nature. He had a gift of bringing people from every walk of life together, and he was happiest when listening to fellow Louisianans’ stories.

Luke went to Start Elementary School and later graduated from Ouachita Christian School in 1998. Luke’s passion for politics emerged when, as a fifth grader, he was chosen to place the wreath on the Tomb of the Unknown Soldier during a field trip to Washington D.C. In 2003, Luke graduated from Louisiana Tech University, where he earned a bachelor’s degree in Computer Information Systems and served as chairman of the Louisiana Tech College Republicans and the Louisiana Federation of College Republicans.

As a young college graduate, Luke served on Congressman John Cooksey’s staff and later on the Congressman and Governor Bobby Jindal’s staff. In 2013, Luke and Julia moved to Denver, Colo., where he worked in the oil and gas industry before returning to Louisiana to run Dr. Ralph Abraham’s 2014 campaign for Congress. Luke then served as Congressman Abraham’s Chief of Staff for his six years in office. In 2020, Luke launched a successful bid for the 5th Congressional District seat and was scheduled to be sworn into the United States House of Representatives on Jan. 3, 2021.

Luke met his wife, Julia, in high school. With the foundation of a strong friendship, they developed a deep and abiding love for each other and married on April 27, 2013. The couple was blessed with a son, Jeremiah, born Sept. 21, 2017, and a daughter, Jacqueline, born Jan. 9, 2020. Luke always said his greatest calling on this earth was to be a husband and father.

Luke also had a passion for history and genealogy. His favorite pastime was to research his beloved Richland Parish’s origins and write blog posts of his findings.

His faith in Christ guided Luke’s life. In his younger years, he participated in youth activities at Start Baptist Church, and most recently enjoyed being an active member of Covenant Presbyterian Church in Monroe.

Luke is survived by his wife, Dr. Julia Barnhill Letlow; son, Jeremiah John Letlow, and daughter, Jacqueline Taylor Letlow. In addition to his parents, Johnny and Dianne Letlow, he is survived by his grandmother, Mary Taylor, and his brothers Paul Letlow and Matt Letlow, along with their spouses and children. He was predeceased by his paternal grandparents, John and Janet Letlow, and his maternal grandfather, Richard Taylor.

A worship service giving glory to God for Luke Letlow’s life was held at North Monroe Baptist Church on Saturday, Jan. 2, with a private family burial held at New Salem Cemetery in Start. Services were under the direction of Kilpatrick Funeral Homes of Monroe. Masks and social distancing were required for attendance.

Memorials may be made to the Luke Letlow Family Trust, where all the proceeds will benefit the wife and children of Luke Letlow. Checks can be mailed to P.O. Box 538, Rayville, LA 71269.

Send online condolences to the family at www.kilpatrickfuneralhomes.com.