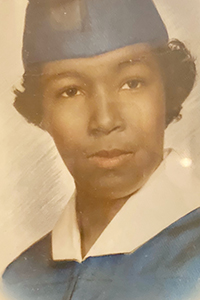 Mrs. Alia Inello Holmes-Johnson, affectionately called “Inello,” or “Nell,” passed away peacefully at the age of 70 on Jan. 3, 2021, at Rest Haven in Bogalusa.

She was preceded in death by her late, third husband, Eddie Johnson; her parents, Ellis Holmes and Margarette Holmes; two sisters, Mary Holmes-Hatcher and Janis Holmes; and her youngest brother, Jeffrey Holmes.

Alia or Nell was a retired Bell South telephone operator and former member of Mount Carmel Baptist Church. She was a tenacious, independent woman who had an impeccable work ethic, style, sophistication, and class. After graduating from Central Memorial High School, she attained an associate degree from Southeastern Louisiana University in Hammond. She enjoyed gospel and many other genres of music. Although she was a lifelong resident of Bogalusa, she loved to travel, especially in her younger years.

She was the eldest of five children. She is survived by her brother, James Holmes. She was very close to her surviving nephews, Travis L. Holmes of Munich, Germany, Darrin A. (Michelle) Holmes of Hammond, and John Downey Jr. of Bogalusa; a great-niece, La’Kenya Porter of Baton Rouge, and two great-nephews, Darrin Holmes of Baton Rouge, and John Downey III of Bogalusa; special first cousins, Earl (JoAnn) Bridges of Bogalusa, and Michael (Tammy) Bridges of Baton Rouge; an aunt, Beulah Mae Cowart, and uncles from Tylertown, Miss.; numerous nieces, nephews, relatives and many close friends and former coworkers.

Rest in peace, Aunt Nell! We will always remember your infectious smile and laugh.

A private family service will be held on Saturday, Jan. 9, at 3:30 p.m. at Crain and Sons Funeral Home. Burial will be held at the Bogalusa Cemetery.