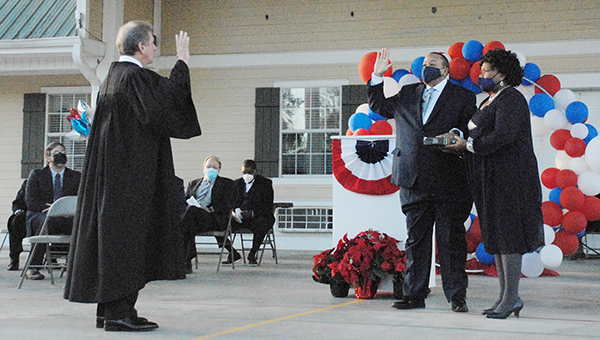 Louisiana Supreme Court Justice Will Crain, a Bogalusa native, administers the oath of office to new Franklinton mayor Greg Route during Tuesday’s inauguration at the fairgrounds.

It was Inauguration Day in Franklinton on Tuesday afternoon at the Washington Parish Fairgrounds.

New Franklinton Mayor Greg Route Sr., along with the new Board of Aldermen, were sworn into office by the Honorable Judge Will Crain, who now serves as a Louisiana Supreme Court Justice.

Route gave all of the credit to God in his speech at Tuesday’s ceremony.

“If it wasn’t for Him, I wouldn’t be standing here today,” Route said.

Route thanked the ministers and elected officials, along with the Washington Parish Fair Board for allowing them to have the ceremony on the stage.

Route said the day he was elected mayor, his phone rang off the hook with local politicians and other political natives from towns he knows.

“I just want to thank them for the advice they have given me and I look forward to working with you all,” Route said.

Route also talked about improvements he plans on making — such as drainage, paving streets and sidewalks.

“Our sidewalks right now are not handicapped-accessible and we need that,” Route said.

Route said he and his team would be organizing a citizen planning committee for the Town of Franklinton.

“They’re going to plan activities throughout the year once we get over this COVID,” Route said. “My wife is going to head that committee and she is going to be calling on different people around the Town of Franklinton.”

Route said they are going to focus on recreation.

“We are going to organize a recreation department here in the Town of Franklinton,” he said.

Route said it will take a little while to do what they want to do, but once they obtain the land, he is going to talk to other elected officials to get the property for the recreation department and use that land as a source to get a grant for the Town of Franklinton.

Route also said one of his goals will be to improve code enforcement.

Route closed his speech by thanking the citizens of Franklinton, and his campaign staff. He said he is the mayor of all of the people for the Town of Franklinton.

In addition to Route, four aldermen and one alderwoman were also sworn in.

Each of them made remarks as well.