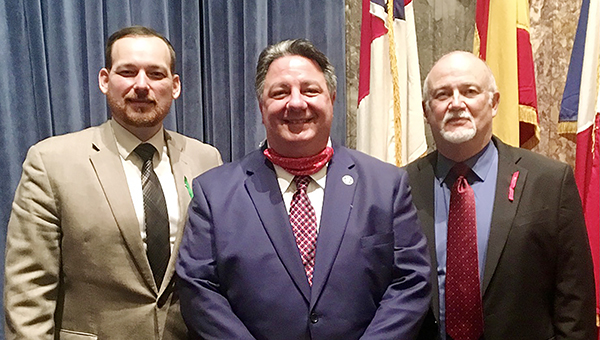 The 2020 Louisiana Electoral College met on Monday, Dec. 14, to cast ballots for the nation’s president and vice president based on the results of the Tuesday, Nov. 3, election. Louisiana has eight electors, one to represent each of the six U.S. Representatives and two at-large electors for the two U.S. Senators.

Each political party selects a group of electors. Since the Republican candidates, President Donald Trump and Vice President Michael Pence, won the vote in Louisiana, the electors selected by the Louisiana Republican State Central Committee were invited by the Secretary of State to participate in the event.

All eight votes were cast for Trump and Pence.

Washington Parish was well represented at the event that was held in Baton Rouge in the Louisiana State Senate chambers. Caleb Martin, pastor of Ben’s Ford Baptist Church, was invited to offer the invocation. Martin stated it was a great honor to participate in this very important part of our nation’s governing process.

“This event is based upon our Founding Fathers’ guidance that I believe was inspired by God when He led our ancestors to establish a country based on His principles,” he said.

The other parish resident to participate was Phillipp Bedwell. Bedwell is the delegate to the Republican State Central Committee for the district, which includes the Franklinton and Bogalusa area of Washington Parish. He was selected earlier in the year to be an alternate for one of the at-large electors.

Bedwell stated it was an honor to be selected, and even though he did not get to cast a ballot because all of the primary electors attended, it was a very humbling experience and one he hopes to participate in again in 2024.

Joannie Miller, a member of the Washington Parish Republican Women and the Republican Parish Executive Committee; and Martin’s sister and nephew, Shanda and Lucas Slocum, also attended the event.

Although Trump won the votes of electors in the state of Louisiana, Democratic Party nominee Joe Biden has been declared the president elect. On Monday, Dec. 14, Biden received the votes of 306 electors to Trump’s 232. As of Tuesday afternoon, Trump had still not conceded the election and had vowed to continue contesting the results, citing voter fraud and other irregularities.