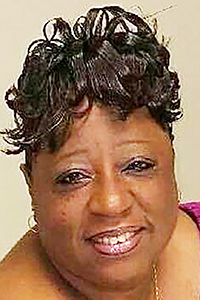 Deborah Ann Davis was called home on Tuesday, Dec. 15, 2020, at her home in Franklinton.

Later on in life, she worked as a Mental Health Technician at Greenbriar, in Covington, for 25 years. She loved her job and worked diligently.

She was full of life and loved to laugh, having a good time while spending time with family and friends. Deborah loved her family dearly. She had love for flowers and plants. She loved to fellowship during family cookouts. Deborah loved her crispy fried catfish tails and back bones. Family times were very special to her.

She was preceded in death by her father, Troy Davis; the father of her children, Billy Ray Causey; and one brother, Richard Davis.

The funeral service will be held on Wednesday, Dec. 23, at noon at the Cook-Richmond Funeral Home Franklinton location. Visitation was held on Tuesday, Dec. 22, at the chapel from 3 p.m. until 6 p.m., with a family hour beginning at 6 p.m.