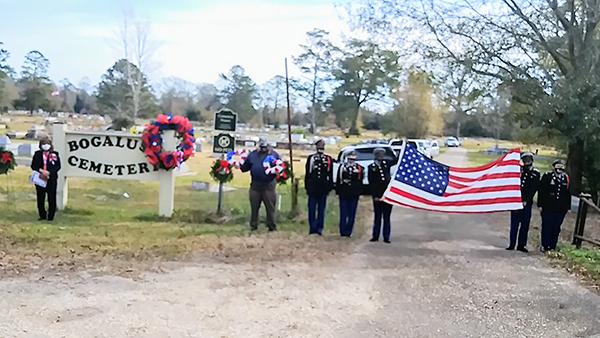 Although much of Saturday’s event was done “virtually,” some representatives did attend a public ceremony at Bogalusa Cemetery.

On Saturday, Dec. 19, Bogalusa celebrated its 10th “Wreaths Across America” in recognition of this country’s fallen veterans.

This observance is an annual nationally coordinated celebration with Arlington National Cemetery and over 2,100 other locations across the country. This includes six sites here in southern Louisiana and Mississippi. Bogalusa has participated in this celebration for 10 years.

As recognition of this dedication, Bogalusa site coordinator, Emma Dixon, has been cited with The Wreaths Across America’s Ten Year Recognition Award. The Bogalusa celebrations have been in the Bogalusa Cemetery, at the site previously sponsored by the old American Legion Coney/Flowers Post.

This year’s celebration was conducted under restrictions due to the COVID-19 situation, and much of it was virtual. The on-site program featured the beautiful flag unfurling and furling ritual performed by the Bogalusa High School Jr. ROTC, using the actual flag flown over the U.S. Capitol in Washington, D.C. in honor of Bogalusa’s own A.Z. Young — the noted civil rights leader and decorated U.S. Army war veteran. Further featured in the virtual version were Bogalusa natives retired U.S. Marine Corps Maj. Christopher Buckley and retired U.S. Air Force Tech Sgt. Henry Chatman.

Buckley has had a long military career. He retired from the U.S. Army in February 2016 after serving 21 years of service. At the time of his retirement, he served as the Mission Training Complex Simulation Officer and Deputy Training Division Chief at Fort Bragg in North Carolina. His military awards and decorations include the Bronze Star Medal, the National Defense Service Medal, the Iraq Campaign Medal, the Global War on Terrorism Expeditionary, the Global War on Terrorism Service Medal, the Overseas Service Ribbon (3OLC), the Army Meritorious Service Medal (3OLC), Army Commendation Medal (3OLC), Service Ribbon and the Air Assault and Parachutist Badge.

After retirement he accepted a Department of the Army civilian position as the Virtual Training Program Specialist for 7th Army Training Command in Germany, until November of this year. He is currently residing in Hempstead, N.C., where he is assigned to the U.S. Marine Corps Forces Special Operations Command and serving as a Department of the Navy Civilian and Modeling and Simulation Specialist at Camp Lejeune.

Buckley is a graduate of Bogalusa High School and Grambling State University.

Chatman is a Central Memorial High School graduate, who joined the U.S. Air Force at age 20 in May of 1960. He retired from military service after 30 years.

In total, he and his wife Barbara had 16 assignments that spanned six continents. Some of his foreign assignments included Turkey, South Korea, the Philippines and Italy.

This year’s theme was “Be An American Worth Fighting For.”

Special thanks for the success of these problems over the years goes out to Calvin Johnson, Elbert Buckley Jr., Darin Dixon and the BHS Jr. ROTC.

Additional thanks was made for the celebration’s 10-year partners. These include the City of Bogalusa government, Total Transport for delivery of the wreaths, the Washington Parish NAACP, Bogalusa High School Jr. ROTC, and DAV Bogalusa Disabled Veterans Association Toxie Camp #32.