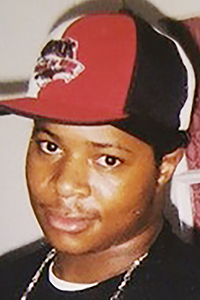 With deepest sorrow, we announce that Rickey “Big Baby” Pittman, 36, our most beloved son, brother, father, family member, and friend, passed on Wednesday, Dec. 9, 2020, at Our Lady of the Angels Hospital. Those who knew Rickey, even just a little, lost a shining light in their lives.

Rickey “Big Baby” Pittman, the son of Rickey Pittman Sr. and Chiqueta S. Pittman, was born Dec. 17, 1983, in Bogalusa. He took an early liking to music and played football, baseball, and was always one to take care of others.

He graduated from O. Perry Walker High School in 2002, where he was a member of the football team. Rickey acquired a genuine interest for sports and athletics, which earned him a full scholarship to Southern University. Later, Rickey moved to New Jersey in 2005 and he began working for FedEx and later on a construction company.

Rickey and Karen met in the summer of 2005 at a flea market called “Cowtown” in Pilesgrove, N.J. During the following two years they dated, and Rickey became a part of Karen’s family, celebrating holidays and weddings. It was always a time of fun and laughter if Rickey was around. He was always willing to help in any way and loved enjoying life with the people he loved. He was also always cooking. While Karen was pregnant, one thing he always made sure of is that she ate, often whipping up something out of nothing.

They welcomed their beautiful daughter, Alani Ra’Miyah-Ka’Pre Stull, in July of 2007. Alani adored her dad. Rickey would take her to the park, Six Flags, and different events in New Jersey. He took advantage of any chance to show Alani off and brag about her. He attended her first Valentine’s Day Father and Daughter Dance at her school in 2014. Rickey had so much goodness, so much capacity to bring happiness to others and such a bright future.

He returned to Bogalusa in 2016, and while mapping out his future plans, Rickey began to work as a cook for Don’s Seafood in Covington. Later meeting and embracing his son, Jaiden Jamal Peters with his late mother and Rickey’s fiancé, Myranda Louise Peters. Rickey was an active and dedicated member of the Motorcycle Club.

Since Rickey’s death, many have written about how special he was and how fortunate they were to have known him. They admire how he built connections with communities wherever he traveled. They reminisce about his ever-present smile and the warmth, depth, and intelligence behind it. Most of all, they recall the sheer pleasure of his company, how good he made them feel, how free they were to be themselves around him, and how much they will miss him. Rickey cared about people in the purest way. He loved them for who they were, and he wished the best for them without guile and without expecting anything in return. As one of his closest friends wrote, “What you saw was always what you got with him, and if what you saw, if you were lucky enough to be his friend, was truly a delightful, generous, easy-going, fun, loving human being. A son that passed away way too soon. We love and miss you so much my son.”

A funeral service will be held Saturday, Dec. 19, at 1 p.m. at Crain and Sons Funeral Home of Bogalusa, with the Rev. Eddie Perdue officiating. Interment will be in Bogalusa Cemetery.