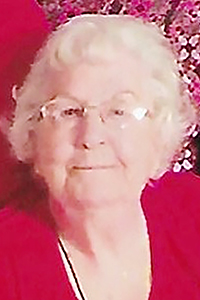 Mrs. Peggy J. Dertil Sharp passed away in her home on Dec. 11, 2020. She was 89 years old. She was a life long resident of the Isabel community. She was a long time member of the Isabel Homemakers crochet club, in which she started. Mrs. Peggy worked many happy hours making (Excellent Quality) items for the children at St. Jude’s hospital, she also enjoyed doing various charity work. Mrs. Peggy also enjoyed doing many other crafts, too numerous to mention. She will be greatly missed by the remaining two members of the crochet club, who are also her sister-in-laws, Caroleen Johnson and Beulah Enman. She will also be missed greatly by her beloved pets, Teddy Bear and Roscoe.

She was preceded in death by her husband of 71 years, Mr. Everette Sharp; one son, Terry Wayne Sharp; her parents, Frank E. Dertil and Elizabeth F. Cowans; and two brothers, Gene Dertil (Sylvia) and Dennis Dertil.

Friends and relatives of the family were invited to attend funeral services on Tuesday, Dec. 15, beginning at 10 a.m. until the service time at 1 p.m. Services were officiated by Brother Michael Thomas. Interment immediately followed at Mizell Cemetery, in the Isabel community.

Services were entrusted to Brown-McGehee Funeral Home of Bogalusa.