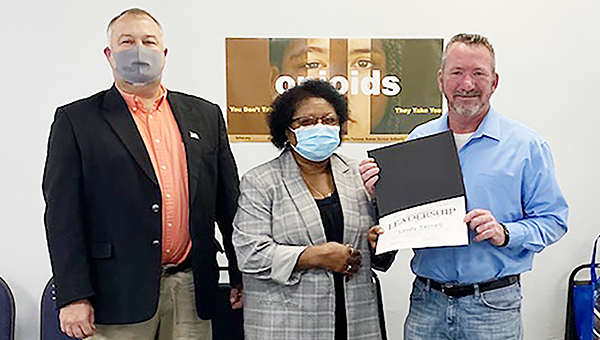 The guest speaker was Lindy Terrell, who spoke of his road to recovery and desire to help others find the pathway for their own recovery. According to Terrell, “Rehab has a 20-30 percent success rate, but with God, there is a 100-percent success rate as long as you leave it in his hands!”

Reports were given by members. Rusty Fornea, ADAPT Executive Director, announced that ADAPT is continuing to offer all services, including the sexual assault services which are free. ADAPT has opened an office in Franklinton on Cleveland Street to primarily provide sexual assault services. He also reported that our DFC Youth program has 94 youth from around the parish enrolled.

Rhonda Gunnell, ADAPT/PFS Director, reported that Prevention Connection/Partnership for Success meetings are held each month at 8:30 a.m., prior to the WPCHS meeting. The meetings are open to anyone who would like to join forces in reducing underage drinking and substance use by youth. She also reported on activities and events that took place in November.

Jennifer Johnson, Early Steps Region 9, reported that Early Intervention is providing support for families with children that are developmentally delayed, and they are taking referrals for entry. Her number is 985-429-1252.

Lauren Franklin, Nurse Family Partnership, reported that they have services available for the first-time pregnant mom. She can be contacted at her office, 985-871-0210 or by cell, 504-343-0043. Nnenna Mimimah, SE Advocates for Empowerment, announced that they have some spots for housing of domestic violence victims. Her number is 985-542-8384. Katasha August, Bogalusa High School Health Center, reported that BHS students will remain virtual following the week of Thanksgiving and they will continue offering services to students who have health needs.