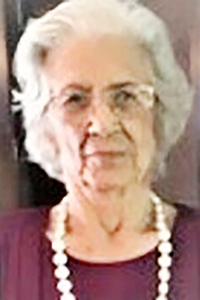 Ms. Hilda was born on May 30, 1925. She was a proud mother, grandmother, great- grandmother and aunt. Ms. Hilda was a dedicated member of Main Street Baptist Church, where she served as a Sunday School teacher, member of the church choir and Bible School Director for many years.

Ms. Carnegie served as the Activities Director at Resthaven Nursing home for many years. She was an avid gardener and many in the area enjoyed the vegetables that she produced in her garden. She sold vegetables from a small stand in the front yard and donated the proceeds to her church, her donations enabled Main Street Church to complete several projects. She also donated vegetables to The Bogalusa Help Center.

Ms. Hilda was preceded in death by her husband, Taylor Leon Carnegie; her only son and daughter-in-law, Jimmy and Darlene Carnegie; her parents, Morgan and Rosa Dean Sumrall; sisters, Ada Thomas and Mary Magee Creel; and brother, Robert Sumrall.

Ms. Hilda always showed her appreciation to her pastor. Her current pastor Rev. Patrick Magee was treated like a son following the death of her own son.

Funeral services were held on Tuesday, Nov. 24, in the Chapel of Poole-Ritchie Funeral Home at 11:30 a.m., with the Rev. Patrick Magee officiating. Interment followed in Hillview Memorial Gardens in Bogalusa. Visitation began on Tuesday, Nov. 24, from 9:30 a.m. until the service time at the funeral home.