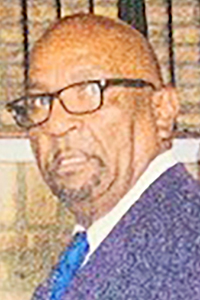 “For me to live is Christ, and to die is gain. If I am to live in the flesh, that means fruitful labor for me. Yet which I shall choose I cannot tell. I am hard pressed between the two. My desire is to depart and be with Christ, for that is far better.” (Philippians 1:21-23).

Retired United States Army Veteran, SP4 Johnny Ray Weary, aka “Fats,” is the youngest twin son born to the late James (Junior) Claiborn, Margie Weary-Harry and step-father John R. (JI) Weary. He was born Aug. 29, 1950 in Bogalusa. He received Christ and was baptized at an early age. He was a servient member of Mt. Zion Missionary Baptist Church in Varnado, under the pastoral leadership of the late Dr. Alphonso Nelson for many years, and then current Pastor, Dr. Byron Muse. Johnny Ray Weary is a life-long pillar in the Varnado community where he resided until his passing.

As a young Soldier, SP4 Johnny Ray Weary was stationed in the 1st Infantry Division in Fort Riley, Kansas 5th U.S. Army and served in the Vietnam War. He received several noble medals including: The National Defense Service Medal, two Overseas Bars, Vietnam Service Medal, Sharpshooter (M-16 Rifle) and Vietnam Campaign medal W/60 DVC. He served in the U.S. Army until his honorable discharge in 1976, but he housed the heart of a Soldier.

“Jesus said to them, ‘I am the bread of life; he who comes to Me will not hunger, and he who believes in Me will never thirst’” (John 6:35).

Johnny loved his church family and proudly served on the Usher Board greeting members and visitors with opened arms and a warm smile for many years. He eagerly sought an understanding of the scriptures participating in Sunday School and Bible Study. He enjoyed singing joyful praises in the Male Chorus, and served as a member of the Brotherhood. He accepted any assigned tasks, but he took a special pride shinning the floors of God’s House. The church was his refuge and the Altar was his place of restoration.

He was a big man with a good heart full of compassion for people; especially, children and young men in the community and across the country who know him as “Uncle Fats.” He was a proud Father of his children but he also fathered many in the community. He spread laughter and treated a stranger as a friend. When he committed, he committed. When he saw someone in need; he gave cheerfully. He protected like a lion, but he was also humble as a lamb. Most of all, he showed a special love and reverence for the elderly in the community who adored him.

Johnny confidently embedded his Soldier’s marching cadences in the hearts of many who encountered him. He inspired the qualities of a Soldier’s character of excellence, loyalty, determination and commitment in his daughters, grandchildren and the many lives he touched. His faithful spirit will forever live in his family and lives he influenced and encouraged. Generations will remember the echoes of his marching cadence he taught and song through the years… “They say that in the Army the chow is mighty fine, A chicken jumped off the table and killed a friend of mine. Oh, Lord, I wanna go, But they won’t let me go. Oh Lord, I wanna go hooo-hoo-hooome!”

The homegoing Celebration will take place Saturday, Nov. 21, at Mt. Zion Missionary Baptist Church, 64115 Jones Creek in Varnado, officiating, Dr. Byron Muse is pastor. Due to COVID-19 restrictions, immediate family only (seating limits advised). Face covering and COVID-19 precautions will be adhered to. Thank you for your understanding.

Interment will be in the B.B. Moses Cemetery.

“I have fought a good fight, I have kept the faith, now there is in store for me a crown... read more