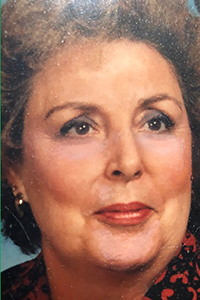 Elva Jo Boyd Rogers Porter, 88, passed peacefully away on Oct. 22, 2020, surrounded by her family at her former home in Bogalusa.

Jo raised her four children, staying home as a housewife. She was active in ESM Methodist Church and the lead soprano soloist for 54 years, a proud accomplishment. Toxie and Jo got actively involved in the antique business, opening shops in Rio and Bogalusa, along with setting up at two different markets in Louisiana and Mississippi.

She was a lifelong resident of Bogalusa. Toxie and Jo square-danced with the “Jeans & Queens” for many years, with her writing the newsletter that was published in The Daily News. She was also a seamstress and also catered events, being a very good cook.

She will be greatly missed. Rest In Peace, Mom.

A memorial service will be held at a later time. Brown-McGehee Funeral Home is in charge of the arrangements.