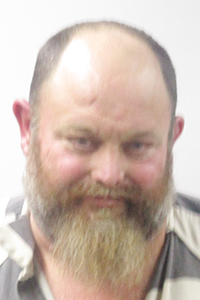 A Mt. Hermon man was arrested Saturday, after allegedly threatening to burn down a residence with a woman and her daughter inside, according to Chief Deputy Mike Haley of the Washington Parish Sheriff’s Office.

Haley said that WPSO Sgt. Michael Thomas responded Monday to the report of the suspect making the threat. The two females then fled to a nearby church, where they called 911, Haley said.

“Sgt. Thomas went to the location of the females, then proceeded to locate the man who had made the threat,” Haley said. “Shortly thereafter, Sgt. Thomas encountered James L. Smith, 43, Mt. Hermon resident, sitting in a truck. As Sgt. Thomas approached, and before mentioning why he was there, Smith stated that he was using gasoline only to clean his truck.”

Haley said that Deputy Randall Garcia arrived to assist and Thomas placed Smith under arrest, charging him with aggravated assault domestic abuse and domestic abuse with child endangerment. Smith was transported to the Washington Parish Jail.

“Anger management seems to be an issue for too many people,” Washington Parish Sheriff Randy Seal said. “I am grateful to Sgt. Thomas and Deputy Garcia for resolving this situation before it got out of hand.”