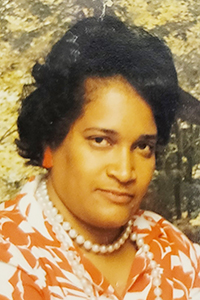 “I will bless the Lord at all times; His praise shall continually be in my mouth” (Psalms 34:1).

Helen Ladner Riley was born Jan. 22, 1948, to the late Morris and Myrtis Ladner. She left this earth to spend eternity with Christ on Wednesday, Sept. 30, 2020.

At an early age, she joined a small church in Mississippi where she gave her life to Christ.

Helen was united in marriage to T.C. Riley and the union bore six children.

Helen was preceded in death by her parents, Morris and Myrtis Ladner; her husband, T.C. Riley; four brothers, Lieutenant Ladner, Lavern Ladner, Christopher Harris and Jesse Ladner; and one sister, Estelle Bailey; along with her son-in-law, Ernest Davis Jr.

The funeral service was held on Saturday, Oct. 10, at 11 a.m. at the Cook-Richmond Funeral Home in Franklinton. Visitation was on Friday, Oct. 9, from 2 p.m. until 6 p.m. at the chapel.

Cook-Richmond Funeral Home was in charge of arrangements.