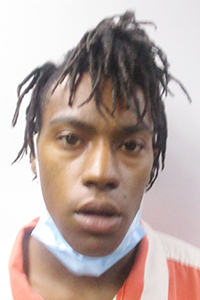 A Mt. Hermon man was arrested Wednesday for attempted murder, according to Chief Deputy Mike Haley of the Washington Parish Sheriff’s Office.

“Late in the evening of Oct. 7, Washington Parish Sheriff’s Office Lt. Terry Harris, Deputy John O’Hern, Detective Captain Tom Anderson and Lt. Brent Goings responded to Martin Road near Mt. Hermon in reference to a shooting,” Haley said. “Upon arriving at the scene, officers determined the shooting resulted from a verbal feud between neighboring families that escalated into a shootout.

“After an exchange of words, one of the parties armed himself with a 9-mm pistol, drove to the neighbor’s house and engaged his neighbor in an exchange of gunfire. Witnesses on the scene testified that Ravon Marquel Brumfield, 22, was the instigator and fired the first shot that led to his neighbor being wounded. The neighbor was transported to an area hospital and is expected to make a full recovery.”

Brumfield was arrested and jailed on charges of attempted second-degree murder and simple battery. His bond was set at $125,000.

“Our wonderful Second Amendment, which guarantees every citizen’s right to keep and bear arms, does not mean that a citizen may shoot a fellow citizen for the sake of argument,” Washington Parish Sheriff Randy Seal said. “Mature and responsible adults should always be able to resolve conflicts without shooting at each other. If there is a conflict, call us and we will intervene to help resolve the conflict in a peaceable manner. That’s what our officers do, 24 hours per day, seven days per week.”