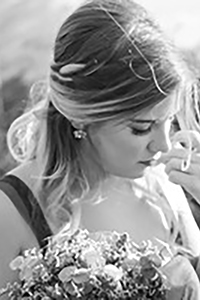 “I cried endlessly when you died but I promise, I won’t let tears mar the smiles that you’ve given me when you were alive.”

On Thursday, Sept. 24, 2020, Sarah Parker, beloved daughter, granddaughter, sister, and friend, passed from this life into her heavenly home at the age of 26.

Sarah was born on May 20, 1994, in Covington, but was raised in Bogalusa, a place much too small for her larger than life personality. Sarah attended school at Annunciation Catholic School and graduated from St. Scholastica Academy in 2012. She also attended Louisiana State University. Much of her childhood was spent dreaming, creating, and embracing spontaneity, and honestly, her adulthood was spent much the same way. She never turned down an opportunity to have fun, to travel, to eat, or simply to live. Some people merely exist, but Sarah truly lived, and she lived life to the absolute fullest every second of every day. She enjoyed photography, painting, cooking, fashion, and travel. Although you never knew what she would be wearing, you knew that she would look good. She traveled the world from Seattle to Miami, from Cabo to New York, from St. Croix to Iceland, and everywhere she went, she brought her fearless spirit and made friends along the way.

Those who called her friend rarely referred to her as Sarah. To them, she was “Sparker,” because she brightened any room that she walked into. She would tell you that she was the life of the party, and that if you planned the party, she would bring the fun. However, she would probably be running late. Her loved ones will remember her smile, her dimples, her laugh, and her adventurous nature. They will remember her often irreverent sense of humor, her stubbornness, her stories (because she always had a story), and the way she made you feel. Sarah never met a stranger, so her family feels that she is probably talking God’s ears off at this very moment. Although her loved ones are struggling to come to terms with her loss, Sarah would look at her death as her life’s next great adventure.

Services celebrating Sarah’s life will be held at Poole-Ritchie Funeral Home in Bogalusa on Saturday, Oct. 3. Visitation will begin at 1 p.m. and continue until the time of service at 3 p.m. Interment will follow at the McGehee Cemetery in Bogalusa.