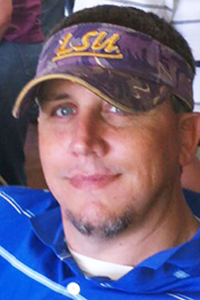 Michael Millard Rogers, 43, of Bogalusa, passed away on Aug. 29, 2020. He was an avid fisherman who loved the outdoors, LSU, and spending time with his family. He was a 1995 graduate of WWMCA and a member of Lighthouse Church in Jackson, La.

He is survived by his mother, Patsy H. Rogers, of Bogalusa; sister, Sandra (Lonnie) Atkins of Bogalusa; daughter, MaKayla Rogers and granddaughter, Dalilah Claire of St. Francisville; fiancé, Charlotte Guillory; and sons, Austin and Ryan; nieces, Abigail and Gabrielle Atkins; and a host of aunts, uncles and cousins.

Visitation was held on Friday, Sept. 11, from 11 a.m. until the time of the service at 2 p.m., at Brown-McGehee Funeral Home in Bogalusa, with the Rev. Joey Hoyt, the Rev. Terry Hoyt, and the Rev. Larry Hoyt officiating.