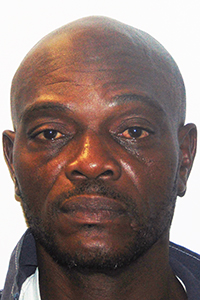 On Saturday, Trent O’Neal Brown, 52, a resident of Homochitto Street in Bogalusa, fled from Washington Parish Sheriff’s Office Patrol Deputy Raymond Myers after Myers spotted him traveling at a high rate of speed on Louisiana Highway 21 north of Bogalusa, according to WPSO Chief Deputy Mike Haley.

Refusing to stop, Brown fled south on Highway 21, turning west onto City Limits Road and into a residential neighborhood off of Dauphine Street, committing numerous traffic violations while fleeing, Haley said. Brown abandoned his vehicle and fled on foot to the rear of an apartment building.

“Myers called for assistance and Bogalusa Police Department officers arrived on the scene,” Haley said. “Meanwhile, Myers confirmed that the vehicle was registered to Brown. As officers searched the area, Bogalusa Police Department officers spotted Brown and took him into custody near the intersection of Convenience Street and Lincoln Street. He was turned over to Myers and transported to the Washington Parish Jail.”

Brown was jailed on charges of resisting arrest by flight in a vehicle and on foot, reckless operation of a motor vehicle, having an open container and disturbing the peace. His bond was set at $18,500.

Haley said that Brown has a lengthy history of incarceration in Washington Parish, beginning in November 2016 on charges of domestic abuse with child incarceration. Eight other arrests since that time include charges of resisting arrest, unauthorized entry into an inhabited dwelling, criminal trespass, failure to appear in court, domestic abuse battery, sale of illegal drugs and home invasion.

“Good job, Deputy Myers,” Washington Parish Sheriff Randy Seal said. “Driving while drinking, especially at a high rate of speed, is a recipe for potential disaster. I am grateful Brown was taken into custody without incident and no one was injured due to his careless driving.”