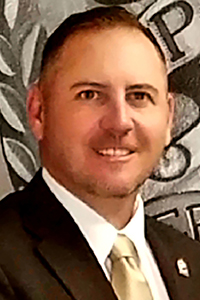 This article was written by Franklinton Police Chief Justin Brown.

Last Wednesday, Capt. William Stogner and I traveled to the Lake Charles Police Department to deliver the many donations our citizens provided.

About 30 to 40 miles east of Lake Charles, traffic started to slow. This is about the same time storm damage started to show. As we got closer to the city, the damage became increasingly worse. When we arrived, I could see the description I had been provided was accurate. It looked as if a bomb had gone off and nothing was left untouched. Every single standing structure was damaged; the degree of devastation is incomprehensible.

On a lighter note, Chief Caldwell and the amazing officers at LCPD were excited to see us. Chief Caldwell sends his heart-felt gratitude to all of you who donated items and money to aid in their assistance.

We spent some time talking with Franklinton native and current LCPD Officer Ryan Magee. He was in good spirits and like his fellow officers, Ryan spends his days rotating between working shift and helping his co-workers tarp their roofs, cutting trees and cleaning up storm damage. He and the officers on his shift were all sleeping in the same house before they had to move out so it could be gutted and repaired. One officer quipped, his police car has had nine flat tires in the last week. They finally got running water where they can at least take a shower; a small but positive advancement indeed.

Time seems to be standing still for these officers, most don’t even know what day of the week it is; to them, it doesn’t matter. What matters is, they take care of each other so they can then take care of the public they serve. Their task is a daunting one with no foreseeable end in sight. The challenges they face and the balancing act between family, community and duty are exhausting. They will need our prayers, they will need our support and I have no doubt, our community will deliver for them. Lake Charles and the surrounding areas are out of our televised viewing area. As the days progress, less and less coverage will be afforded to them. Out of sight, out of mind, yet their struggles remain. Compassion is the only subject matter at stake here and compassion doesn’t sell the way controversy does. Let’s make it our goal to be in support of them until they no longer need it.

In order to simplify and streamline our process, my office will be accepting monetary donations. We will in turn take your donation and purchase the specific items needed. Checks can be made to the Fraternal Order of Police Lodge #47 and cash will be accepted as well. You can drop your donation to our dispatch office located at 409 11th Ave. in Franklinton.

I would personally like to thank the vendors who so graciously donated items and to each of you for your contributions.