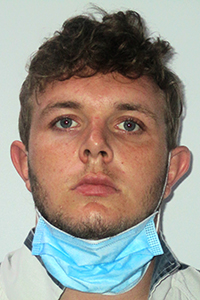 On Friday, a Lee’s Creek man was arrested on gun charges related to an investigation that began several days earlier, according to Chief Deputy Mike Haley of the Washington Parish Sheriff’s Office.

William Zachariah Bennett, 23, a resident of Lee’s Creek Road, was placed in the Washington Parish Jail and charged with three counts of being a convicted felon in possession of a firearm.

“Bennett, using the false name of ‘Yougin Kooling,’ engaged in a social media chat with someone he thought was interested in purchasing a firearm from him,” Haley said. “Little did he know the chat friend was actually Washington Parish Sheriff’s Office Det. Chad Cassard, who was investigating Bennett based on information about previous illegal gun sales. Assisted by patrol deputy Kyle Stogner, Cassard arranged to meet Bennett at a Bogalusa location to purchase the weapon at an agreed upon price.

“For unknown reasons, Bennett did not show for the meeting, after which Det. Cassard obtained a search warrant for Bennett’s residence.”

Washington Parish detectives then conducted the search warrant, Haley said. During the search, Lt. Brent Goings reportedly discovered Bennett hiding in a closet. Bennett was arrested, advised of his rights and transported to jail.

Haley said that this trip to jail marks the fifth arrest for Bennett. In 2015, he was arrested for theft. In early 2016, he was jailed for contempt of court and failure to appear in court. This was followed by a 2018 arrest for being a convicted felon in possession of a firearm, theft of a firearm and failure to honor a written promise. His fourth arrest was in August for domestic violence.

Any person who has purchased items from Bennett or a person using the name Yougin Kooling, is asked to contact Det. Chad Cassard at 985-839-3434, extension 2054. Callers may remain anonymous.

“Young Mr. Bennett is not starting his adult life in a right direction,” Washington Parish Sheriff Randy Seal said. “Since his first arrest at age 18, he seems to have chosen a lifestyle that can have only a negative ending. He’s still young, however, and there is ample time for him to reverse course and be a good citizen.

“Let’s hope he begins making better choices. Many thanks to our fine officers for putting this illegal gun seller out of business.”