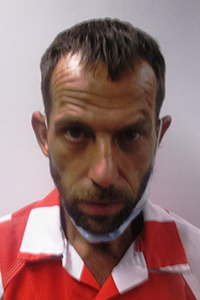 Haley said that Patrol Sgt. Charles Easterling responded to the burglary late Monday evening. The case was turned over to the detective division and was solved within a few hours. On Tuesday, WPSO Det. Raymond Myers and Deputy Kyle Stogner arrested the burglar and recovered the stolen property.

When the victim described the vehicle the burglar was driving, detectives immediately identified Hallinan as a prime suspect, Haley said. Myers and Stogner went to Hallinan’s residence and reportedly observed some of the stolen items in plain sight. Myers and Det. Chad Cassard then obtained a search warrant for Hallinan’s property and the remainder of the stolen property was recovered, including jewelry, coins, tools and numerous other items, Haley said.

Also arrested at Hallinan’s residence was Wendy Machaele Dossett, 38, described as Hallinan’s girlfriend. At the time officers arrived, she was attempting to destroy some of the stolen items in a burn pile located on the property, Haley said.

Dossett has one previous stay in the Washington Parish Jail. In March, she was charged with three counts of possession of stolen property.

“What a fantastic job by our officers,” Washington Parish Sheriff Randy Seal said. “Solving a burglary within 12 hours after it occurred is a remarkable feat. I am so appreciative of the efforts of our detectives, Raymond Myers and Chad Cassard, as well as our patrol officers, Sgt. Easterling and Kyle Stogner.” 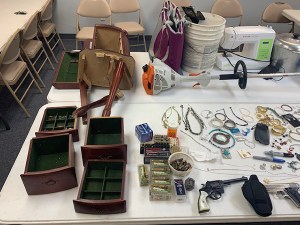 Shown are some of the allegedly stolen items (Courtesy photo by Washington Parish Sheriff’s Office).