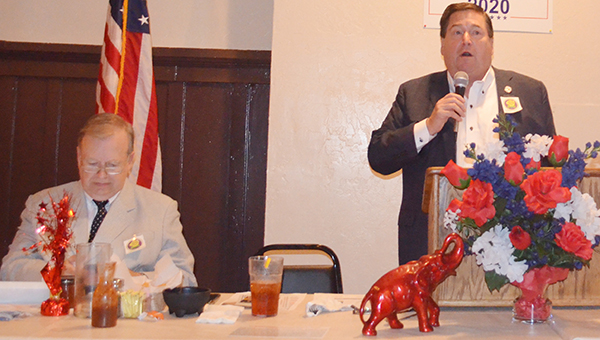 Louisiana Lt. Gov. Billy Nungesser was the guest speaker during the August meeting of the Washington Parish Republican Women.

Nungesser spoke to the political group on Wednesday, Aug. 12, at Maria’s Mexican Restaurant on Austin Street. Although the main dining room was closed, the reception room in the back was opened to the group, as members wore masks and socially distanced due to the COVID-19 pandemic.

COVID-19 was also a key focus of Nungesser’s remarks, as he pointed out some of the challenges that the state is facing in its tourism industry.

“We’ve been shut down for a long time, and now we’re starting to crawl back open,” he said.

The lieutenant governor said that the state’s tourism officials are instituting a four-step plan to bring tourism back once the COVID-19 danger wanes.

Nungesser said that tourism officials are offering some “Louisiana lagniappe” to companies and organizations who hold conferences or conventions in the state. Some of these benefits might include free food and entertainment.

“We don’t want to crawl back to the tourism industry once we re-open,” he said. “We want to hit it with a bang.”

As part of the “stay-cation” plan, Nungesser said that many parishes have created videos marketing their area’s tourist draws. Washington Parish has Bogue Chitto State Park, outdoor activities and historical landmarks, he noted.

Nungesser said that he puts a special focus on state parks and forests and other natural resources. He pointed out that three of the state’s parks currently make a profit, and hopes to add to that list through better management.

“I see a day when our state parks don’t need any tax money to stay open,” he said.

Nungesser also praised Washington Parish officials, including State Sen. Beth Mizell, for their work in bringing a future veterans park to the parish.