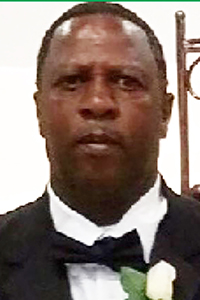 He joined church at Lear Hill C.O.G.I.C. at an early age. He attended school at Franklinton High School.

He was a dedicated truck driver and mechanic for over 30 years. When he was not driving trucks he spent his time gardening, working on tractors and riding his four-wheeler. He was also a loving husband and father to his wife and six beautiful children and grandchildren. All it took was one phone call and he was there, no matter what the obstacle was.

He leaves to cherish his memories: his wife, Michele Riley Davis; four daughters, Porcha Riley Sims (Reginald) of Dallas, Texas, Jasmine Davis, Franchesca Davis and Jayla Davis, all of Mt. Hermon; sons, Patrick Davis of Mt. Hermon, and Ernest Davis III of Covington; and his mother, Nicy Davis of Clifton. He has six sisters, Deborah Davis, Camilla Davis and Tina Davis Donaldson (Ray), all of Rochester, N.Y., Betty Green (Jerry) of Homer, Joyce Kemp (Vince) of Varnado, and Priscilla Magee of Slidell; and two brothers, Tony Davis of Franklinton, and Vince Davis of Homer. He also leaves mother-in-law, Helen Riley of Abita Springs. He had five brothers-in-law, Joe Ladner of Slidell, W. C. Ladner (Jerrie) and Brian Riley, both of Lacombe, Michael Riley (Allie) of Madisonville, and Fennie Riley of Mt Hermon; three grandchildren, Avery and soon to be Avia Sims and An’Drez Leblanc; and a host of aunts, nieces, nephews and other relatives and friends. He also had one godsister that he loved dearly, Kezelle Warren.

He was preceded in death by his father, Ernest Davis Sr.; and his grandparents, Elisha Davis Sr. and Ernestine Davis, Ed Bickham and Hynethia Bickham.