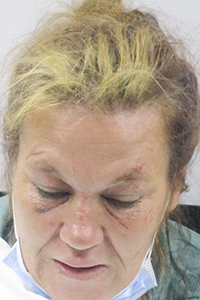 Haley said that Michelle Laura Jenkins, 45, a resident of Louisiana Highway 436, is being held in the Washington Parish Jail facing numerous charges, including resisting an officer with force or violence, aggravated flight from an officer, distribution and possession of prescription drugs without a prescription, possession of illegal drugs, possession of drug paraphernalia, theft, contempt of court, numerous traffic violations and being a fugitive from Mississippi.

The extended incident began Saturday afternoon, with a report of a vehicle blocking the highway with a female slumped over in the driver’s seat, Haley said. WPSO Sgt. Jay Dupre responded to the scene, along with Deputy James Gregorio. Varnado Police Officer Forrest Holcomb and George Jones, who were closer to the location responded also and were the first officers on the scene. When the Varnado officers arrived, the driver of the suspect vehicle sped off, heading west on Highway 436.

Haley said that Gregorio was approaching the scene from the west and was able to deploy spike strips on the highway. The fleeing vehicle drove over the spike strips, flattening tires, and then crashed into a roadside ditch. The driver exited the vehicle and fled into nearby woods, Haley said. Dupre arrived on the scene and called for the canine team from Rayburn Correctional Center to assist.

The RCC canine team, along with WPSO narcotic detectives Lt. Brent Goings and Kevin Bond and Brad Eckert, searched the woods for approximately one hour before locating Jenkins and taking her into custody, Haley said.

Due to complaints from Jenkins, she was assessed by Northshore EMS personnel who had been standing by, and then transported to Our Lady of Angels Hospital for further assessment. Jenkins was medically cleared and transferred to the Washington Parish Jail.

Haley said that Jenkins will remain in the Washington Parish Jail until local charges are handled by the courts, or she posts a bond of $26,000. When that occurs, she will be extradited to Mississippi to face felony charges there.

“Once again, the Rayburn canine team provided valuable assistance,” Washington Parish Sheriff Randy Seal said. “It doesn’t matter what hour of the day or night, the fine officers from Rayburn always respond. They are professionals in every sense of the word and RCC’s well-trained canines do an excellent job.

“I also thank the Varnado Police Department for responding so quickly. Washington Parish citizens are fortunate to have first-class law enforcement agencies which work together for the common good of all who reside in our fine parish.”