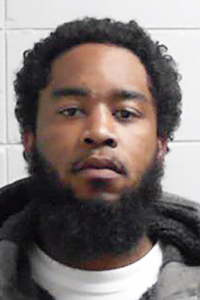 A Bogalusa man has been arrested on second-degree murder charges, in connection with a fatal shooting last Thursday, according to Maj. Wendell O’Berry of the Bogalusa Police Department.

O’Berry said that the BPD received a call of “shots fired with one person down” on Thursday, at the intersection of Austin Street and Coburn Street. Upon arrival, BPD officers discovered that Marcus Tennison, 35, of Bogalusa, had been shot, and he died on the scene as a result of his wounds, O’Berry said. Another man had been wounded and went to the hospital for treatment. His wounds were not life-threatening.

O’Berry said that detectives were called to the scene and an investigation began. On Tuesday afternoon, detectives identified a suspect. Damion Thompson, 28, of Bogalusa, was identified as the shooter.

Warrants for his arrest were obtained for second-degree murder, possession of a firearm by a convicted felon, illegal use of weapons, and aggravated battery. BPD detectives, assisted by the Washington Parish Sheriff’s Office, began a search for Thompson, O’Berry said.

“During the search, information was obtained that Thompson was in Hammond,” O’Berry said. “Detectives began tracking Thompson’s movements and went to Hammond to attempt to locate him. While detectives were en route, the Hammond Police Department was contacted with information on Thompson’s possible location.

“In less than an hour, the Hammond Police Department’s Street Crimes Unit located Thompson, and he was taken into custody without incident. He will be returned to Bogalusa to be arrested on the aforementioned warrants.”

O’Berry said that Thompson is no stranger to the Bogalusa Police Department.

“He is a convicted felon with a violent criminal past,” he said. “We urge the District Attorney’s office to aggressively prosecute Thompson for his crimes, so that Mr. Tennison’s family can have some measure of justice and closure.

“Although the police have jurisdictional boundaries, criminals do not. We are fortunate to have a great working relationship with our surrounding agencies, which led to a quick arrest in this case. The Bogalusa Police Department thanks the Washington Parish Sheriff’s Office for their assistance locally, and we thank Chief Edwin Bergeron and the Hammond Police Department for their quick response in capturing Damion Thompson.”