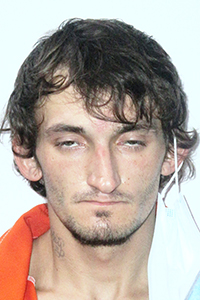 A Washington Parish man was arrested last month after attempting to flee from officers on an ATV during a criminal investigation, according to Chief Deputy Mike Haley of the Washington Parish Sheriff’s Office.

“After turning off of Highway 21 onto Seal Road, the officers encountered a man on an ATV who fled west on Seal Road,” he said. “The chase continued on Seal Road to Military Road, through a cemetery, back on Seal Road and then to Monroe Creek Road. When the ATV became disabled, the driver attempted to flee on foot before deputies were able to subdue him. Arriving on the scene to assist were Washington Parish Sheriff’s Office Lieutenant Chris Hickman and Varnado Police officers Louis Adams, Jeff Kelly and Kelly Penton.”

Haley said that the driver of the ATV, Dustin James Vanslyke, 26, a resident of Louisiana Highway 438, was arrested and transported to the Washington Parish Jail where he was booked on charges of operating an off-road vehicle on a highway, reckless operation of a motor vehicle, aggravated flight from an officer, criminal damage, two counts of resisting an officer and no driver’s license. He spent seven days in jail before being released on bond.

Haley said that Vanslyke is well known to law enforcement officers in Washington Parish, having been in the Washington Parish Jail six other times since 2012. Previous charges include burglary of an inhabited dwelling, vehicle theft, two counts of burglary of a vehicle, possession of illegal drugs, being a convicted felon in possession of a firearm, theft of a firearm, two counts of failure to appear in court and parole violation.

“Anytime an officer responds to a situation where a firearm might be involved, that officer is going into a potentially life-threatening situation,” Washington Parish Sheriff Randy Seal said. “Our officers could take no chances and knew Vanslyke had a history of possessing firearms. I am so pleased no one was injured and Vanslyke was able to be transported to jail.

“I am grateful to the good work of Deputy Cassard and Deputy Stogner, as well as the assistance provided by Lt. Hickman and our partners with the Varnado Police Department.”