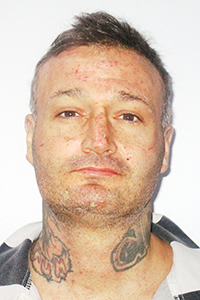 A Bogalusa resident, who was a fugitive from the Mississippi Department of Corrections and Probation and Parole, was arrested early Friday morning after a pursuit involving both officers on foot and the Rayburn canine team, according to Chief Deputy Mike Haley of Washington Parish Sheriff’s Office.

On Thursday evening, WPSO Patrol Sgt. Charles Easterling and Deputy Mitchell NeSmith were dispatched to Old River Road south of Bogalusa in an attempt to locate a fugitive who was reported to be in the area, Haley said. As the officers searched the area, NeSmith spotted the fugitive, Joseph Anthony Lorio II, jogging on O.A. Green Road.

“When NeSmith ordered him to stop, Lorio jumped a gate and fled into nearby woods,” Haley said. “The Rayburn Correctional Center canine team was alerted and arrived on the scene, along with Washington Parish Sheriff’s Office Lt. Brent Goings.”

At approximately midnight, Lorio was located, apprehended, arrested and transported to the Washington Parish Jail, where he was booked on charges of resisting arrest by flight and being a fugitive from the Mississippi Department of Corrections and Probation and Parole.

Haley said that Lorio, 39, whose Bogalusa address is listed as Hillcrest Road, has been in the Washington Parish Jail on one previous occasion. In August of 2012, he was booked into the jail on multiple charges of carnal knowledge of a juvenile, contributing to the delinquency of a juvenile, resisting an officer by flight on foot, two counts of simple battery, two counts of extortion, two counts of being a fugitive from another jurisdiction and two counts of failure to appear in court.

“The old adage, you can run but you can’t hide, certainly applies in this situation,” Washington Parish Sheriff Randy Seal said. “Sooner or later, we will find you, and the Rayburn canines and officers are experts in locating anyone who runs.
“I appreciate the fine efforts of both our officers and Rayburn officers in locating Lorio and taking him into custody. Since 1983, Rayburn has been a tremendous asset to Washington Parish and they are always willing to assist law enforcement.”