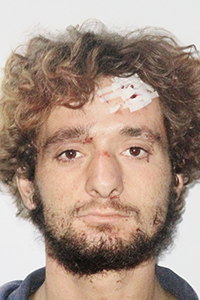 In an unusual turn of circumstances, a Franklinton man was pursued and apprehended by a citizen after fleeing a hit-and-run accident Tuesday, according to Chief Deputy Mike Haley of the Washington Parish Sheriff’s Office.

Steven M. Tew, 21, of Plymouth Lane, was booked into the Washington Parish Jail on charges of careless operation of a vehicle with accident, possession of marijuana, possession of methamphetamine and having no driver’s license.

Haley said that the saga began when Tew struck another vehicle on Nobles Cemetery Road at the intersection of D.C. Crain Road, and then fled the scene. A witness, who was a former law enforcement officer, followed Tew’s vehicle until he crashed his car at another location on Nobles Cemetery Road. As Tew fled his vehicle, the citizen was able to detain and hold him until law enforcement officers arrived, Haley said.

When Washington Parish Sheriff’s Office patrol deputy Kyle Stogner arrived at the location, he was able to recover marijuana and methamphetamine that Tew had tried to conceal when he exited his vehicle. Tew was offered medical treatment by Northshore EMS, which had arrived on the scene, but refused before being taken to jail. He was provided medical treatment by the jail medical staff after arriving at the jail.

“In this case, a concerned citizen made a quick apprehension possible,” Washington Parish Sheriff Randy Seal said. “His experience as a former law enforcement officer was very helpful, enabling him to quickly detain Tew until Deputy Stogner arrived on the scene. We appreciate his assistance in this matter.”