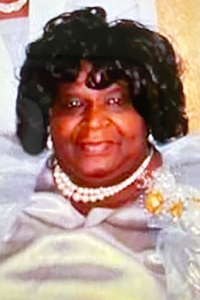 Mary Jane Magee, a resident of Bogalusa, passed away July 21, 2020, in Slidell Memorial Hospital. She was surrounded by her family and friends. She was 69 years old.

She leaves to cherish her memories: two daughters, Shelia Taylor and Janice Taylor, both of Bogalusa; one son, Calvin Magee of Covington; one step daughter, Norma Jean Bass of Prentiss, Miss.; one stepson, Isaac Magee Jr. of Prentiss; one granddaughter, Kiana Taylor who was the love of her life; and one son-in-law, Herbert (Ja’bot) Molette of Covington. She also leaves behind four sisters, Paulina Dean and Sylvia Lewis, both of Bogalusa, Betty Brock of Covington, and Virgina Armstrong of Monticello, Miss.; two brothers, Shelton Brumfield of Bogalusa and Larry Armstrong of Jackson, Miss.; two special cousins that she loved talking with, Gilda (Ernest) Martin and Irma Jean Scott, both of Bogalusa; three special friends whom she loved, Patricia Henry, Precious Tillman and Mary “Lucky” Brumfield, all of Bogalusa; two sisters-in-law, Joyce Taylor and Eula Taylor, both of New Orleans; and a host of nieces, nephews, cousins, and friends.