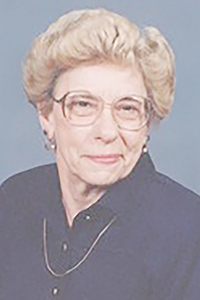 Louvre M. Alexander, 87, passed away on July 20, 2020, in Mandeville. She is reunited in Heaven with her husband and love of her life, Donald S. Alexander, who passed away in 1987.

Born during a snowstorm at the family farm in Mott, N.D., to parents Henry and Amelia Mehrer, she graduated from Greeley High School in Colorado, and then later attended Colorado State University in Ft. Collins, Colo., where she met her future husband. Don and Louvre were married and moved to Bogalusa in 1954 where Don began his career as a forester for Crown Zellerbach’s Southern Timber Division.

Louvre is survived by her daughter, Karen L. Remson and her husband Don of Jefferson Hills, Pa.; her son, Carl A. “Andy” Alexander and his wife Carla of Covington; and her son, Mark S. Alexander and his wife Linda, of Waterford, Conn. She is also survived by seven grandchildren, Paul Remson (Mercedes) of Portland, Texas, Kristen Remson of Stillwater, Okla., Samuel Alexander (Molly) of Waterford, Austin Alexander of Worcester, Mass., Shi’Ann Turnbull of Livingston, Jodey Greco (Jon) of River Ridge, and Austin (Lauren) Sharp of Covington. She was also blessed with great-granddaughters, Cecilia Remson and Faith Schibi, both of Portland, and Vayda Greco and Alaiyna Sharp of River Ridge and Covington.

In addition to her husband, Louvre was preceded in death by her parents; her sister, Jane J. Kochenberger of Ft. Collins; her brother, Arnold L. Mehrer of Mott; her son, Gary D. Alexander of Bogalusa; and her granddaughter, Allison Sharp of Covington.

There will be a graveside service at Hillview Memorial Gardens on Spring Valley Road at 10 a.m. on Tuesday, July 28, but no in-church service or calling hours. The service will be conducted by Rev. Jim Stayton, pastor of the First Presbyterian Church of Bogalusa. Poole-Ritchie Funeral Home is handling the funeral arrangements.

In lieu of flowers, the family requests memorial contributions to the First Presbyterian Church of Bogalusa and the Washington Parish Habitat for Humanity.