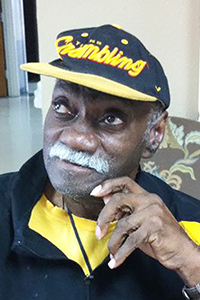 Thurnell “Hawk” Fortenberry-Garrett was born on July 30, 1945, to Katherine Fortenberry and Herbert Garrett in Franklinton.

Hawk attended Washington Parish School, where he graduated in 1963, and he later attended Grambling State University. While at college, he played basketball and he was very good at it. He was well known for how he would handle the basketball; he would have you up on your feet waiting for the dunk.

Hawk served in the U.S. Army and was honorably discharged. After returning, he was employed at Gaylord where he was recognized for 25 years of dedicated service. He became ill and had to retire.

Hawk gave his heart to the Lord in January of 1999 at High Praise Fellowship under the leadership of Pastor Chuck Constant. He served the Lord faithfully until the end.

Hawk was loved by everyone who knew his kind heart.

Hawk leaves to cherish his memories a loving family and many friends who love him dearly and will greatly miss him. Look to the hills from which cometh your help.

Hawk will be honored with a private service. Crain and Sons Funeral Home of Franklinton is in charge of arrangements. Sign the guestbook online at www.crainandsons.com.