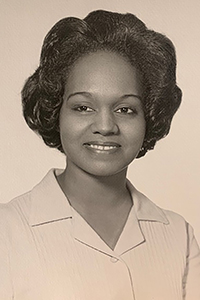 Nercelia Wilson Butler, a longtime and proud resident of Franklinton, and gifted former teacher, died on July 4, 2020, at North Oaks Hospital in Hammond, at 78 years young.

Born to Alma Magee Wilson and Theodore Wilson Sr. on June 25, 1942, she was the fifth of seven spirited and cherished children. She married Dock Butler Jr. in 1964 in Port Arthur, Texas, and lived for many years in Vallejo, Calif., where she raised her two children, Judy Lynn Butler and Gerald Butler. She returned home to Franklinton in the year 2000 and has been a faithful member of New Jerusalem Baptist Church.

She will be forever missed by her son, and daughter-in-law, Gerald and Dove Butler; her two grandchildren, Gerica and Gabriel Butler of Vallejo; as well as her sister and caregiver, Hynethia Wilson-Dadzie; and sisters and brothers-in-law, Bobbie Jean and Hamilton Burris, and Zolda and Dock Dyson, all of Franklinton.

She was preceded in death by her daughter, Judy Lynn Butler; her parents, Alma Magee Wilson and Theodore Wilson Sr.; as well as her brothers, Theodore Jr., Abe and Myrtis Wilson.

Nercelia will have a private service in the family cemetery on Thursday, July 9, at Green Magee Cemetery. Crain and Sons Funeral Home of Franklinton are in charge of arrangements. Sign the guestbook online at www.crainandsons.com.