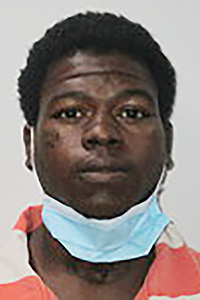 Franklinton Police Department officers recently announced that they have made two arrests, in connection with a June 3 arson incident.

On that day, the FPD responded to an aggravated arson at a residence on Bene Street. On arrival, officers located a fire that was quickly extinguished. Officers were able to obtain video surveillance from the residence, which provided images of two individuals pouring an accelerant and lighting a fire.

Franklinton Police Chief Justin Brown said that the video was uploaded to the FPD’s social media pages, and public assistance helped the FPD identify both suspects.

Brown said that one of the suspected arsonists was determined to be a 16-year-old juvenile, and the other was an adult identified as Mardeontae J. Lee, 22, of Franklinton. The juvenile’s identity is not being released, due to his age.

Brown said that patrol officers located the juvenile in Franklinton on June 20. The juvenile was reportedly interviewed by officers in the Investigations Department and subsequently confessed to his involvement in the crime. Detectives were unable to locate Lee, and a warrant was issued for his arrest, Brown said.

On Monday, FPD detectives located Lee at his residence, where he was arrested without incident, Brown said.

The investigation is on-going and it is believed to be in retaliation for an earlier homicide which occurred on June 1, where Paul Robinson was arrested.

Brown said that he would like to acknowledge the outstanding work of the FPD investigators, for their relentless pursuit of those responsible. He also thanked the community for their assistance in identifying both suspects.

“When the community and law enforcement work together, it makes our town safer for everyone,” he said.