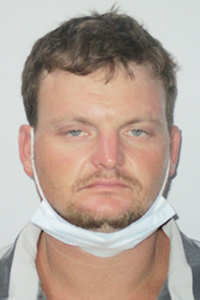 Haley said that Ryan Nicco Smith, 25, of Carriere, entered the woman’s residence without permission and committed battery on her in the presence of her child. The victim then called the WPSO for assistance.

“Patrol Sgt. Michael Thomas responded, but Smith had fled the scene when Sgt. Thomas arrived, likely headed to his residence in Mississippi,” Haley said. “Sgt. Thomas broadcast an alert, asking other deputies to be on the lookout for the vehicle Smith was driving. Patrol Deputy Chad Cassard intercepted Smith in eastern Washington Parish and took him into custody.”

Haley said that Smith had outstanding warrants and was booked on those warrants, as well as current charges. In addition to warrants for probation violation and failure to appear in court, Smith is charged with domestic violence strangulation and domestic violence child endangerment.

Haley said that Smith has one previous stay in the Washington Parish Jail. In 2010, he was arrested by the Louisiana State Police for driving while intoxicated.

“I appreciate the response of our officers to protect this victim and to apprehend Mr. Smith.”