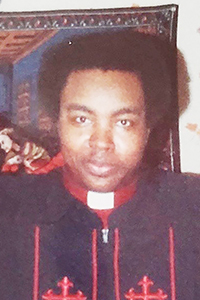 Elder James Rollins Sr. was the third child of four children, two of which preceded him in death; Lawrence Rollins Sr. graduated from Wesley Ray High School in 1972. During his high school years, he was an exceptional athlete and loved animals. Elder Rollins Sr. was a member of Pilgrim Rest Baptist, where he gave his life to God at an early age.

Elder Rollins Sr. was united in holy Matrimony in April of 1976 to his beautiful wife, Marie Conerly Rollins. Soon after, the beautiful couple relocated to New Brunswick, N.J., where they joined and fellowshipped at Progressive COGIC under the leadership of Elder H. Burwell.

Elder Rollins Sr. was employed at Rutgers University in New Jersey as a police officer, from April of 1978 to his retirement in March of 2008, leaving behind 40 years of gainful employment.

The Funeral Service will be Saturday, June 27, at 11 a.m. at the Cook Richmond Chapel in Bogalusa. Elder LaRide Edward Conerly will be officiating, and interment will be in Robinson Cemetery.