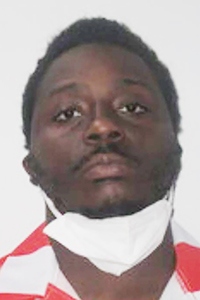 A Franklinton man was arrested Tuesday after fighting with officers and attempting to run away, according to Franklinton Police Department officials.

On Tuesday, FPD officers responded to the Fairground Apartment Complex regarding a disturbance where a person was reportedly observed breaking windows of a vehicle.

FPD officials said that the complainant told officers that her boyfriend, Donshay Dyson, 24, broke the windows of her vehicle.

After the subsequent investigation, the complainant stated she did not want to pursue criminal charges, FPD officials said.

The suspect was observed by officers to have several lacerations to his arm. He refused medical treatment and reportedly cursed at officers during the interaction.

FPD officials said that officers attempted to diffuse the situation and advised the complainant accordingly, with regard to filing charges. The officers then departed the scene without further incident.

A short time later, officers were called back to the apartments because Dyson continued to cause a disturbance and was observed driving erratically, endangering several children who were playing in the area, FPD officials said.

Officers again made contact with Dyson and attempted to place him under arrest. Dyson reportedly ignored the officers’ orders and then violently resisted arrest. Dyson committed a battery on the officers and was subsequently tased after a brief foot pursuit, FPD officials said. Dyson was eventually taken into custody, but only after he reportedly head-butted one of the officers in the face.

Dyson was transported to Riverside Medical Center, where he underwent treatment for the lacerations to his arm before being turned over to the Washington Parish Jail.

Dyson was charged with one count of first-offense DWI, reckless operation of a motor vehicle, no driver’s license, resisting an officer, hate crimes, criminal damage to property, simple burglary, disturbing the peace, and two counts each of child restraint and battery on a police officer.