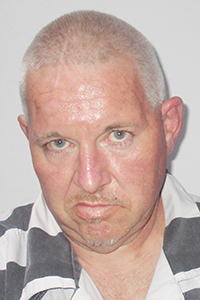 “Late Tuesday evening, Washington Parish Sheriff’s Office patrol deputies Raymond Myers II and Phillip Varnado were dispatched to Ben Williams Road north of Franklinton, in response to a suspicious vehicle located near a residence,” said Chief Deputy Mike Haley of the Washington Parish Sheriff’s Office. “Arriving at the location, deputies observed a parked car with the driver’s side door open and the driver slumped over the middle console.

“After waking the driver, deputies asked that he exit his vehicle. He was sweating profusely, had slurred speech and did not know where he was. The driver gave consent for deputies to search his vehicle. The search revealed a wallet with identification, a quantity of packaged methamphetamine and a semi-automatic rifle.”

Haley said that the driver, identified as Brian K. Dickerson, 42, a resident of Freeman Road, was arrested and transported to the Washington Parish Jail. He was booked into the jail on charges of possession of methamphetamine with intent to distribute, possession of a controlled dangerous substance with a weapon present and possession of drug paraphernalia.

Dickerson is no stranger to the Washington Parish Jail, Haley said. He was arrested and booked in December of 2013 for aggravated battery and unauthorized entry of an inhabited dwelling. In July of 2016, he was arrested again and booked for domestic battery with violence.

“It’s frightening to think that he was likely driving his vehicle while under the influence,” Washington Parish Sheriff Randy Seal said. “What a blessing that he was stationary when our deputies located him and took him into custody. Thanks, Deputies Myers and Varnado, for a job well done.”