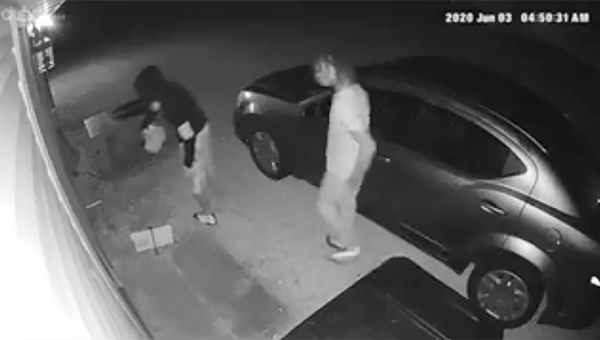 The two attempted arson suspects were recorded by a security camera at the residence. The Franklinton Police Department is looking for these two individuals. The film footage from the camera can be viewed online at the FPD’s Facebook page.

Franklinton Police Chief Justin Brown said that authorities are looking for two suspects who may have tried to set fire to a house several days ago.

According to Brown, in the early morning hours of Wednesday, June 3, FPD officers were dispatched to a residence where video surveillance captured two male suspects reportedly pouring gasoline around a home, and then attempting to set the residence ablaze.

Brown said that two adults and a child were inside the home, and one of the adults was elderly.

According to Brown, this incident is likely related to a previous arrest for murder. Paul Robinson Jr., 51, of Franklinton was arrested Monday, June 1, in connection with the murder of Christole Young Washington, 57.

“This was not a random act of violence,” Brown said. “(It was) a retaliatory attempt to murder the innocent family of (Robinson), the individual we had previously arrested.

“We are asking for the public’s assistance in identifying these two individuals.”

Brown said that the FPD is investigating the incident as a “retaliatory attempted murder and aggravated arson.”

“If you know who the two individuals are or have knowledge related to the attempted murder and aggravated arson, we implore you to reach out to us.”