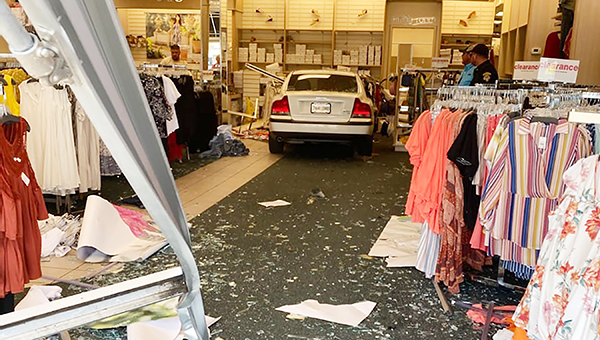 A shopper was injured Wednesday after this Volvo crashed into Cato's Clothing Store in Franklinton. The driver was not injured. (Photo courtesy of Franklinton Police Department)

A 72-year-old woman was injured Wednesday after a driver accidentally crashed a vehicle into the Cato’s Clothing Store near Winn-Dixie in Franklinton, according to Franklinton Police Department officials.

Officials said that that several 911 calls were received regarding the accident. Upon officers’ arrival, a Volvo passenger car was seen inside the store.

FPD officials said that a 72-year-old shopper was struck by the vehicle and was subsequently transported by Northshore EMS to St. Tammany Parish Hospital.

The driver of the vehicle stated she accidentally put her vehicle in drive instead of reverse and inadvertently drove into the building, officials said. The driver was uninjured.