A show of unity: Police, citizens march for social justice 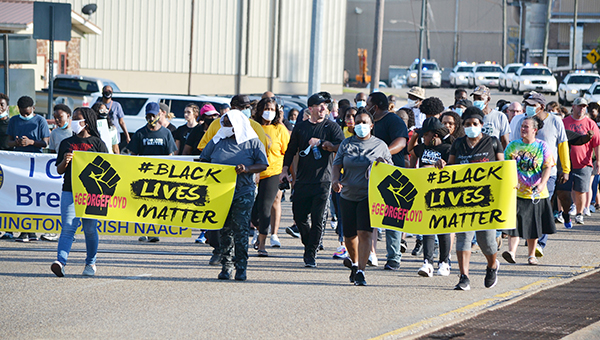 Marchers are escorted by Bogalusa Police Department officers and other first response agencies as they march from Columbia Street to Bogalusa City Hall on Thursday evening. (Courtesy photo by Rick Rogers)

It is about 1,100 miles from Bogalusa to Minneapolis, Minn., but that didn’t stop more than 100 local citizens from coming together Thursday to protest incidents of police brutality like the one that killed George Floyd earlier this year.

Those citizens joined in a march from Columbia Street to Bogalusa City Hall, carrying signs and banners with messages like “Black Lives Matter” and “I Can’t Breathe.”

On May 25, Floyd died in Minneapolis after police officer Derek Chauvin knelt on Floyd’s neck for almost nine minutes while he was handcuffed and face down in the street. Two other officers helped restrain Floyd, and a fourth officer prevented members of the public from intervening.

Chauvin and the three other officers have since been arrested and charged in connection with Floyd’s death.

The incident began a nationwide call for police reform and justice. Some of those protests have led to criminal activity such as rioting, arson and murder, but Bogalusa’s event Thursday appeared to be peaceful and unified.

One reason behind the relative calm may have been that the organizers wanted to be sure it was diverse from the very beginning.

Bruce Sampson, an entrepreneur who has spearheaded the Believe summer drama camp for area children, said that he and other citizens have been trying to develop a “unity project” for some time, and this was the perfect time to bring it together.

“This has been in the works for a while,” Sampson said. “We wanted to do events and projects to bring the community together across racial and economic lines. I feel this community isn’t as unified as it should be, especially in the year 2020.

“(After the Floyd incident), I reached out to some local pastors and we came together for a Facebook Live meeting on Sunday. We had a lot of good discussion, but we also thought there needed to be an event to put those words into action, and that’s why we’re here today.”

Sampson said the three pastors who really took the lead in organizing the event were the Rev. Michael O’Ree of Christ Way Ministries, the Rev. Marcus Rosa of Westside Emmanuel Baptist Church, and the Rev. Field Thigpen of Memorial Baptist Church. Sampson and O’Ree are black, and Rosa and Thigpen are white.

“There was a huge desire for our community to come together,” Rosa said. “No matter the race or background, we wanted everyone involved. We wanted to show greater unity in our community, and it starts with peaceful protests like this one.”

Bogalusa Police Chief Kendall Bullen and the Bogalusa Police Department were heavily involved in Thursday’s event. In addition to providing escorts and protection, some officers even joined in the march.

Bullen said that he has always encouraged his staff to be involved in the community, even well before Thursday’s march. Bullen was named police chief in December of 2016.

“We certainly have been keeping up with what is going on in Minnesota and the rest of the country,” Bullen said. “We wanted to show that we don’t have those kinds of (police brutality) problems here in Bogalusa. I feel like we have done a good job at the BPD of being involved in the community and showing our support for the people who live here. We’re all in this together.

“We feel like Washington Parish can be an example of how to have a peaceful protest. If we can do it here, it can be done anywhere else.”

The local protest involved many high school students, and even younger children. Addisyn Holmes, 4, held a “Black girls matter” sign as she marched with her mother and other family.

“I just think it’s important for kids to see this movement,” said Krystle Holmes, Addisyn’s mother. “Put some action behind the words.”

Nia White, a senior at Varnado High School, said she wanted to do her part to bring awareness.

“I’m here to spread awareness of black people who are being killed by prejudiced white people,” she said. “I feel like police can do a better job. Sometimes things escalate, when they could have been asking calm questions instead. (Black people) aren’t monsters. We aren’t animals.”

White said that she has never had a problem with local law enforcement agencies, but it is still a concern for her as a black person in the United States.

“I’m not saying that all cops are evil,” she said. “But it does make me nervous.”

Aquanis Roberts, a junior at Bogalusa High School, had a simple answer when asked why he chose to join the march.

Sampson said that he hopes Thursday’s march will be just the first of many regular community unity events in Bogalusa.

“We have a lot of things planned,” he said. “We definitely want this to be the beginning of something greater and even more unifying.”