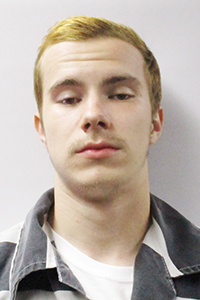 On Monday, the WPSO received notification from the Hancock County Sheriff’s Office that a person they were seeking was in Washington Parish, Haley said. Hancock County had a warrant for Justin Nathaniel Gunnell, 20, for aggravated battery, stabbing another person.

On Tuesday, the WPSO received additional information from Hancock County, indicating the wanted man was hiding out in a residence at 1807 Ave. E in Bogalusa, Haley said.

“When he was searched, illegal drugs were discovered in his pockets. He was transported to the Washington Parish Jail, where he will remain until extradited to Mississippi.”

Haley said that Gunnell is no stranger to Washington Parish law enforcement. In 2017, he was arrested for burglary of an inhabited dwelling, criminal damage to property and five counts of theft of firearms. He was released the following day after posting a $10,500 bond.

“After Gunnell’s 2017 arrest, I hoped that the stark reality of that arrest would signal the beginning of a new course for him,” Washington Parish Sheriff Randy Seal said. “Obviously it didn’t. Gunnell continues to engage in criminal activity and he is likely to spend much of his adult life behind bars. Jails and prisons were designed for persons who refuse to conform to the standards of a decent and civilized society and who have no respect for the rights of others.

“It seems Gunnell fits that description. I appreciate the help of all of our WPSO officers as well as our law enforcement partners from Rayburn. We are glad to be able to assist Hancock County and will always stand ready to work with any law enforcement agency to solve crimes and arrest criminals.”