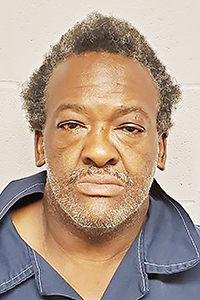 A Franklinton man was arrested Monday for murder, according to officials with the Franklinton Police Department.

Officials said that the FPD receive a call Monday at approximately 10:30 a.m., in reference to a welfare check at 2302 Williams St.

Patrol officers responded to the residence and reportedly found the body of Christole Young Washington, 57, in an overgrown lot behind her residence.

While the crime scene was being processed and secured, detectives were reportedly able to obtain a voluntary inculpatory statement from Robinson, in which he implicated himself in Washington’s murder.

Officials said there were two young children in the residence, at the time the murder was being carried out. They spent the night alone and were picked up by a family friend just as law enforcement was initiating the investigation.

Preliminary information suggests that Robinson and Washington have been acquainted for the past 10 months, thus classifying the crime under domestic violence, officials said.

“The expedient and professional job displayed by our dispatcher, patrol division and detectives, ensured this heinous crime was brought to a swift conclusion,” Franklinton Police Chief Justin Brown said. “From the initial call until Paul Robinson was officially arrested for the murder of Ms. Washington was approximately three hours.”

Brown commended the entire staff and reserve division of the Franklinton Police Department. He said that recognition should also be given to the Town Maintenance Department and Superintendent Reginald McMasters, along with the Washington and St. Tammany Parish Sheriff’s Offices, for the support they provided.

“Our thoughts and prayers go out to the Washington family and those impacted by this senseless crime,” Brown said.