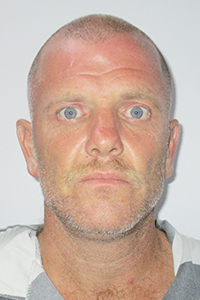 A routine traffic stop on Louisiana Highway 438 near Black Jack Road produced an arrest for possession of methamphetamine Wednesday, according to Chief Deputy Mike Haley of the Washington Parish Sheriff’s Office.

WPSO patrol deputies Chad Cassard and Kyle Stogner were patrolling north of Franklinton when they observed a vehicle with no license plate, Haley said. The driver was issued citations for driving with a suspended license and no proof of insurance.

Haley said that the passenger, Calvin Arthur Finley, 43, a resident of Jenkins Road, was found to have a quantity of methamphetamine and drug paraphernalia in his possession. Additionally, Finley had an outstanding warrant for failure to appear in court.

Finley was arrested and transported to the Washington Parish Jail where he was booked for possession of illegal drugs, possession of drug paraphernalia and failure to appear in court. Finley’s bond was set at $4,000.

“When our officers stop someone for a traffic violation, they sometimes discover someone with outstanding warrants or in possession of illegal drugs,” Washington Parish Sheriff Randy Seal said. “In this case, Deputies Cassard and Stogner were able to remove illegal narcotics from our community. Good job, men!”