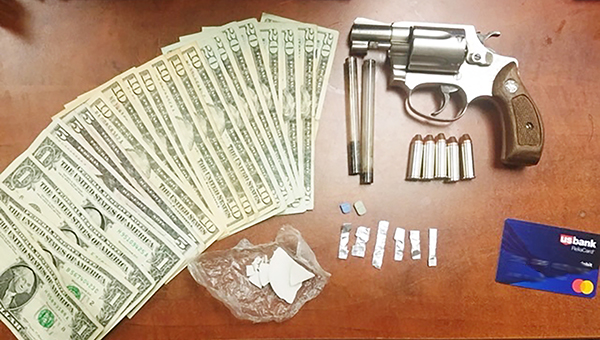 Officers seized evidence from the suspect's vehicle, including cash, a weapon and illegal drugs.

A Mt. Hermon man was arrested Sunday, after he was stopped for a traffic violation and a deputy discovered illegal drugs in his vehicle, according to Chief Deputy Mike Haley of the Washington Parish Sheriff’s Office.

Haley said that WPSO Patrol Deputy Kyle Stogner was on criminal patrol Sunday in Franklinton, when he noticed a vehicle with no license plate and initiated a traffic stop. While questioning the driver, who initially gave a false name and date of birth, Stogner observed what appeared to be a handgun protruding from underneath the car seat on the driver’s side, Haley said. At this time, Franklinton Police Officer James Harper arrived to assist. 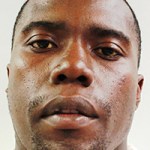 “Deputy Stogner was able to confirm the driver as Jerry Charles Baker, 29, a resident of Reed Road in the Mt. Hermon area,” Haley said. “He placed handcuffs on Baker and received permission to search the vehicle. Inside the vehicle, Deputy Stogner discovered not only the handgun, but also a quantity of illegal drugs, including heroin, crack cocaine, Ecstasy pills, glass pipes commonly used to smoke cocaine, a large quantity of different caliber ammunition and cash.”

Baker was transported to the Washington Parish Jail, where he was booked on several charges including three counts of possession with intent to distribute illegal narcotics, possession of illegal narcotics with a weapon present, possession of drug paraphernalia, resisting arrest by providing false information and traffic offenses. He was also arrested on outstanding warrants for battery of a dating partner and contempt of court. Baker’s bond was set at $30,000.

Haley said that Baker has been in the Washington Parish Jail on previous occasions, dating back to 2011. Those charges included domestic abuse with child endangerment, driving while intoxicated and reckless operation of a motor vehicle.

“Once again, an alert patrol deputy took illegal drugs out of our community,” Washington Parish Sheriff Randy Seal said. “I appreciate Deputy Stogner’s good work and the back-up assistance of Franklinton Officer James Harper. Our two agencies work as partners and we appreciate the ongoing relationship with Chief Justin Brown and his officers.”